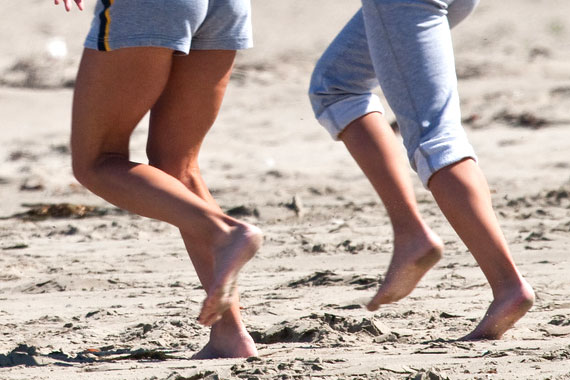 Yeah, you’ve probably seen the “Shit barefoot runners say” (it’s all true), been bored by someone about “born to run” and seen the silly hobbit like toe shoes made by Vibrams (and now copied by others). And you know what, I don’t give a shit. Barefoot running is awesome.

I’m a pretty fit guy, and for most of my life (with a brief hiatus in my early to mid-20s) I’ve run, swum, played organised sport, basically been active. But, I’ve always mostly hated running.

I lived at Bondi beach for over a decade and ran on soft sand for many years. And I loved that. But you know, I never even associated that with running. It was like I was doing something entirely different.  And for a long time, I think that was because of the surroundings – down by the ocean, not pounding the pavement.

But for the rest of my life, I’ve hated running. Road running. Running at footy training, and so on.

But then a few years back I moved to the bush, where quite literally now outside my backyard is a national park. And with young kids, finding the time to ride my MTB enough to classify as, and have the benefits of, real exercise got harder and harder. So, one day I did something I thought I’d never do again. I went for a run. Along a bush track by the sea. And I didn’t hate it, but I didn’t really love it. Every few runs I’d roll my ankle, just enough to really piss me off. And I’d rest a few days and start again.

Then for some reason, while travelling in the US, I bought a pair of five fingers (they were less than half the price here in Australia, so I thought I’d just give them a go). The next time I ran in the bush, I wore them instead of the traditional runners.

And they changed my life. 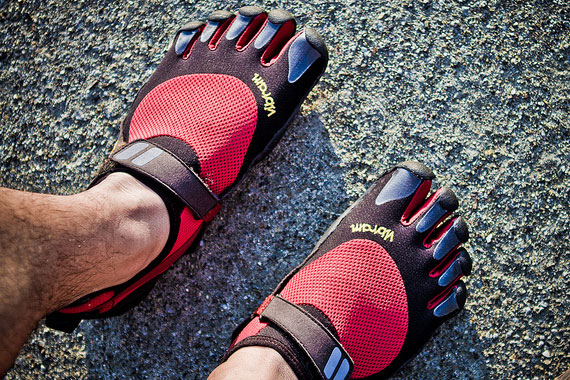 Running went from a bit of a chore, and a bit like taking my medicine, to, well an almost meditative experience. It’s not that I get runner’s highs (ever dammit), or it isn’t hard work at times, but it just feels different. More mindful.

First up, while I have not once rolled my ankle since starting to run in the 5 fingers, I have dislocated, and otherwise banged up my little and other toes. That little toe is pretty vulnerable out there, so there are times I strap the outer two toes together. I even tried the Vibram soled trail gloves by Merrell (which I love to wear around as I walk quite a bit each day), but the one time I wore them I fell and almost cracked my skull open, which I mostly attribute to the lack of balance you get compared with the ability to really splay your toes and maintain your balance when running in the 5 fingers.

And, because I had spent so many years running on sand, the midfoot/forefoot strike of barefoot running came naturally to me, and the muscles of my feet were used to support that style of running. I’ve had friends who are very good runners switch over from regular to barefoot style running, and almost instantly end up with all kinds of foot injuries. The advice that you break your feet in overtime to barefoot running, on the whole, seems very warranted.

So, if you want to take up barefoot running and if you are anywhere near a beach, I’d suggest you get down there, get your shoes off, and run on the soft sand. And if not, there are plenty of sites, even apps, that suggest regimens for transitioning to barefoot running.

I’d also suggest you get off the road, and where possible get onto more varied terrain – get some hills in there, some stairs, different types of surface – exercise your proprioception, and your brain, not just your legs and lungs.

And then maybe throw some extras in there – find an overhanging tree and do some pull ups, a ledge and some tricep dips, a rock the right size and some weights work, a grassy patch and some sit ups. And if you can find an antelope to run to exhaustion over a couple of days, then carry 20kms back home for dinner, all the more paleo! The deer in the national park still have the edge on me sadly.

John Allsopp has been developing for and on the web for nearly 20 years. He’s the co-founder of the Web Directions Conferences and lives in the National Park just south of Sydney, where he tries to find time to run, not always with great success.

Useful barefoot running links:
Barefoot Running Australia
How to prepare for barefooting
Barefoot Running: How Humans Ran Comfortably and Safely Before the Invention of Shoes 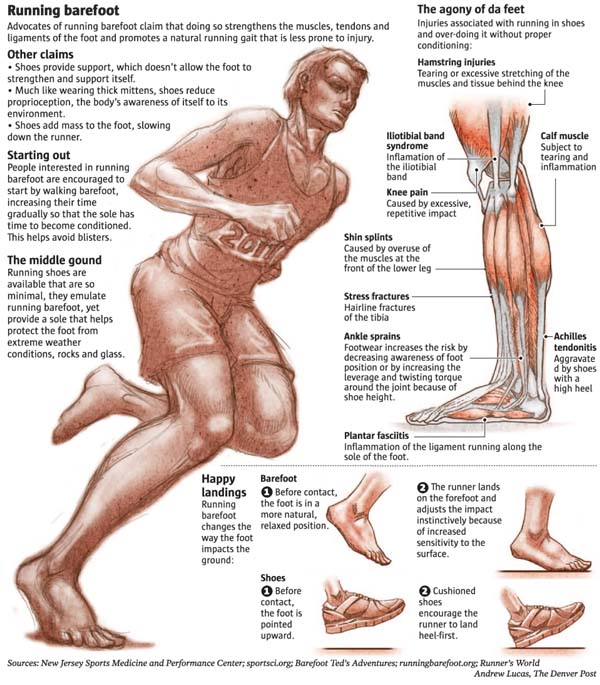